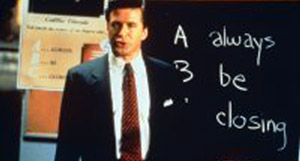 Do you experience lulls in your creativity? Do you run hot and cold with ideas? Want to be ready when you need your creativity the most? Here’s one way you can be sure that you are always at the top of your game.

In David Mamet’s Glengarry Glen Ross, Alec Baldwin shows up to deliver a motivational speech to a room full of salesman. Really it’s more threatening than motivational, but one of the bits of simple “wisdom” he shares with them is the ABC’s of sales. The letters stand for “always be closing.” To a room full of people struggling to make a single sale, this advice seems more like a cruel taunt than a guiding philosophy.

What if we changed the C from “closing” to “creating?” Always Be Creating. Is it a taunt to use this as a philosophy of creativity? Let’s take away the idea of failure. We aren’t using the phrase to imply quality, just quantity. So, there really isn’t a way to fail except by not doing anything. It’s not a taunt, it’s a cheer!

Instead of working on something, finishing it and then waiting for the next project, what if you always had multiple projects going on? They shouldn’t all be equally important. In fact, having a few low priority creative projects to work on for fun is completely freeing. What about writing Bacon Haikus? Or doing a drawing a day? Or even wearing a different outfit every day? It doesn’t have to be something you’re good at, in fact, being bad at it might be better in the long run.

These seeming distractions are actually keeping you at your top creative level! Your creativity isn’t a faucet that you can turn on and off, it’s an exploding geyser in the middle of your brain. The problem is that if you don’t go there all the time, you might forget where it is.

Multiple projects. Plans. A giant novel about a war between the ant-people and the walrus-people.  The perfect cupcake recipe. An elf outfit for your bulldog. A list of believable lies about Abraham Lincoln. A list of heavy metal band names that haven’t been used yet. (That last one is harder than you think.) Designing underwear for chickens. Anything you want!

ABC, Always Be Creating! Don’t take a vacation from doing what you love. Keep your projects secret or put them on the web. It doesn’t matter! The whole purpose is to maintain your highest levels of creativity at all times.