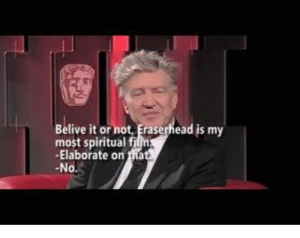 When a friend of mine posted this quote from from a Bafta Television Lecture of David Lynch being asked to explain the spiritual roots of Eraserhead it struck a chord with me. The interviewer innocently asks about the spirituality of Eraserhead and David Lynch shuts him down quickly. We've all been in the situation where a person in authority (a parent, teacher or boss) asks us to tell them where the idea for something came from or what it's supposed to mean. Usually with implication that our creative act is somehow describing ourselves and us explaining it will reveal something about our internal world.

Why should we explain the beginnings of our ideas and tell people what it means to us? Isn't it true that once we've created something it exists on its own. If you could only enjoy or understand a work of art after the artist explains it, you're really not enjoying the art; you're enjoying the explanation. You've saved yourself the effort of bringing any part of yourself to it and filed it away neatly in your head as if it were a riddle and you now know the answer. Also, it puts the blame for your lack of understanding on the creator. If only the work of art were better, you'd understand it.

What I admire most about the Lynch quote is his confidence that he doesn't need to explain. In fact, he doesn't even need to explain his lack of explanation. He spent five years of his life making Eraserhead and knows that it stands on its own. His intentions and intended meanings are incidental to it. Why take something beautiful, creepy and strange and try to diminish it by explaining it away just to make the person experiencing it feel smarter and more comfortable?

The next time someone asks me to explain myself I'm going to smile, shrug and politely decline to answer. Other people not understanding you, when it comes to art, is a wonderful thing. Own your weirdness.