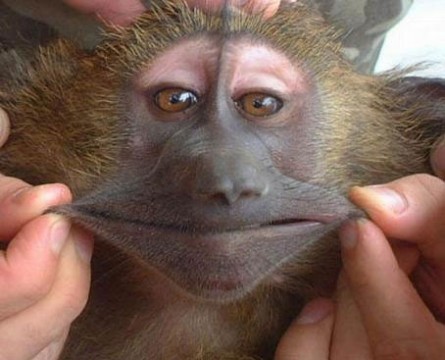 This NY Times article has some interesting observations about why people find things funny. It also talks about the neurological basis for laughter and how scientists tracked down the primal laugh in rats, their laughter is an ultrasonic chirp, and monkeys.

He and Professor Provine figure that the first primate joke — that is, the first action to produce a laugh without physical contact — was the feigned tickle, the same kind of coo-chi-coo move parents make when they thrust their wiggling fingers at a baby. Professor Panksepp thinks the brain has ancient wiring to produce laughter so that young animals learn to play with one another. The laughter stimulates euphoria circuits in the brain and also reassures the other animals that they’re playing, not fighting.

Their conclusion is that laughter is a social lubricant and that who and what you laugh at reveals your spot in the social pecking order.